Celebration Lunch at the Old '76 House in Tappan

After my school internship with the Orangetown Museum, which was from late January to early May, I fulfilled my experience as an intern at the museum and also graduated from college last month.

It was very very nice and sweet that the museum's curator and the director had planned to take us (another worker who also completed her Master's this Spring, and me) to a celebration lunch one day.

The venue chosen for our feast was one of the most historic places in this historical area, the Old '76 House in Tappan. 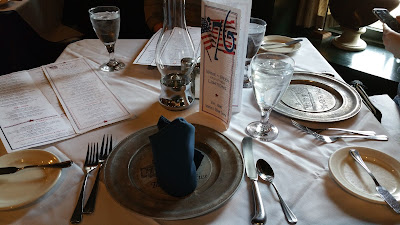 I have heard of the restaurant, but it was my first time to go there to eat, so I was very excited about that.


According to the restaurant, it is "New York's oldest tavern" which was built in 1668. The building itself was already fascinating and romantic to me, who grew up in Asia. 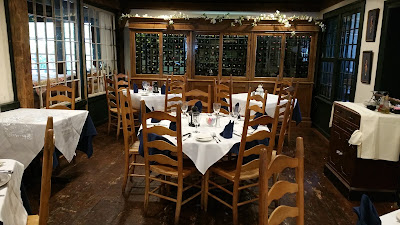 In addition to the beauty of the building, the history the restaurant has, makes this place more special.

During the American Revolutionary War, a British Major, John Andre,  was captured and charged with spying, and taken into custody, here, in the restaurant, until the day of his execution. 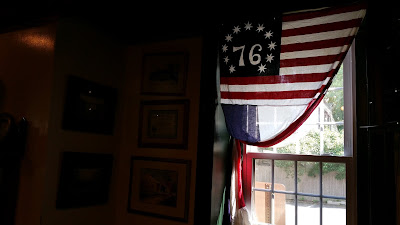 Major Andre spent his last moment in the building and was put to death by hanging on the hill nearby.


The restaurant is also known as a haunted location.
Fortunately and unfortunately, I have neither seen, heard nor felt any ghost-like substance in my life,,, so I do not think I can tell if it is true.
However, the very pleasant and well-informed servers at the restaurant, would be willing to tell you history of the house and ghost stories as well.

We enjoyed the restaurant's interesting stories over nice meal in the great atmosphere. It was so nice that I could go to the restaurant for the first time and had a good time with the museum people.

Although my internship schedule is already over, I continue to work as one of the volunteer members of the Orangetown Museum, so I will be updating this blog as well♪

Thank you very much for reading this blog always, and please visit us again!


Posted by Masako Birmingham at 10:41 PM