Work in Process: Excavated Objects around the Seth's House

We have only about 5 weeks left before the new exhibition opening on May 7th (Saturday).

The Orangetown Historical Museum and Archives has been becoming busier and busier with installing objects and preparing all the material to welcome its visitors for the coming exhibit past/forward.

As a part of the installation, I worked on these boxes of a lot of objects with one of the museum's volunteer workers today. 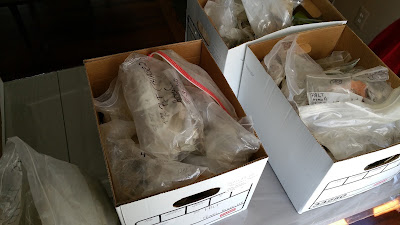 The carefully sorted and packaged objects in these boxes are excavated materials at and around the Seth's House. 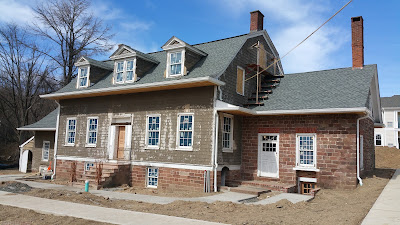 Current picture of the Seth's House

The original structure of the house was built around 1750. Since then, the house was extended as it was passed on to each owner in history. The house has also been vandalized and caused argument over its restoration and demolition.

Then, the act of preservation has finally been carried out recently. The house is now going through the restoration process.

The museum is supporting this restoration as the museum of the town in which the house is located.
It is going to showcase some of the excavated objects around the house at the next exhibition.

So, we worked on choosing objects from the bags.  They were already organized and defined by archeologists.

We found some interesting objects such as an ashtray, metal pieces, fragments of ceramics etc... 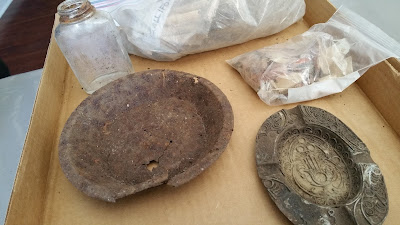 They will be displayed in the museum gallery and play a part of the exhibition from this coming May. 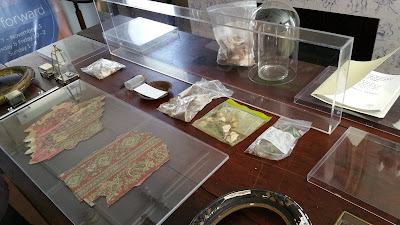 I think it is going to be interesting that these objects from the historical house nearby are shown as actual and tangible examples in the exhibition which is focusing on preservation of the past and forwarding it to the future.

I hope many visitors to the exhibition will enjoy watching these interesting objects at the our museum.
Posted by Masako Birmingham at 8:13 PM