Mr. Geist, One of the Museum's Great Volunteer Members

Orangetowm Museum is a small non-for-profit museum which is run by the town.

The number of temporary employees is limited, however, the museum is always supported by many volunteers, local historians and interns like me :-)

Some volunteers come to the museum constantly, for example once a week, and help with various museum tasks contributing their skill and knowledge.

This gentleman, Mr. Geist, everybody calls him Jack, is one of the volunteer members. 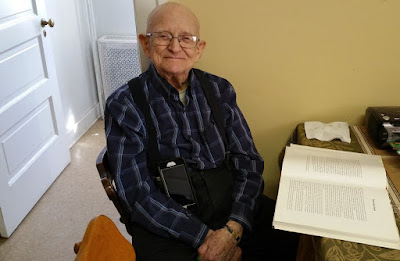 In the town of the Orangetown, there is a lovely village called Grandview along the Hudson River.
Jack was born at one of the houses in Grandview in 1920. He grew up there and worked as the mayor of the village, while he has still been living in the same house where he was born 96 years ago.

As a gifted child who grew up in an artistic environment with a professional photographer (father) and a creative artist (mother), Jack also had a career as a graphic designer at Life Magazine and Time Magazine.

He experienced not only WWII but also the Great Depression.
Recently, we had a conversation about Prohibition during lunch time! He is a primary source of the modern history of America.

Regardless of his age, his memories and skill toward visual material are still very sharp!
He knows so many local people of the town in history. It is a great ability that he can tell who is who by observing black and white archival slides which tell us the old days of the town.
That is something nobody else but he can do. He is the living archive!

Jack is also very open minded and positive about learning new things.
(As you can see, he manages his smart phone too♪)

I like talking to him over lunch :-)
I just found that he liked "origami" so much and has been involved with creating New York's annual "Origami Holiday Tree."
Maybe I can talk with him about origami next time I see him♪

Like Jack, every museum activity is made possible by generous effort of people supporting us.
The museum always appreciates such a good connection to local people.

Posted by Masako Birmingham at 9:59 PM